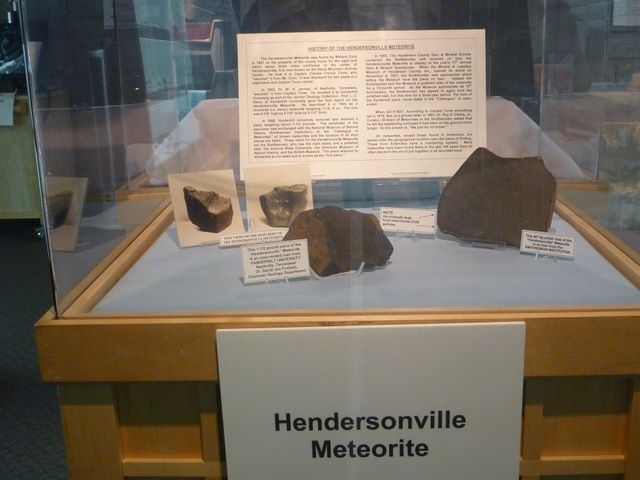 The Hendersonville Meteorite exhibit is one of the most popular in the museum.

The Hendersonville Meteorite was found by William Corn in 1901 on the property of the county home for the aged and infirm about three miles northwest of the center of Hendersonville. It is now known as the Stony Mountain Activity Center. He took it to Captain Charles French Toms, who “secured” it from Mr. Corn. It was displayed for two years at a retail store that Captain Toms owned.

In 1903, Dr. W. H. Jarman, of Nashville, Tennessee, “secured” it from Captain Toms. He donated it to Vanderbilt University as part of the Jarman Geology Collection. Prof. L. C. Glenn of Vanderbilt University gave the first report on the Hendersonville Meteorite. He described it in 1904 as a chondrite (i.e. stony) meteorite weighing 11-lb. 6 oz. The size was 6-1/8″ high by 5-7/8″ wide by 5-1/2″ thick.

In 1906, Vanderbilt University removed and retained a piece weighing about 1-1/2 pounds. The remainder of the specimen was exchanged with the National Museum of Natural History (Smithsonian Institution). In the “Catalogue of Meteorites” all known meteorites and the location of all their pieces are listed. Those listed for the Hendersonville Meteorite are the Smithsonian, who has the main mass, and a polished slab, the Arizona State University, the American Museum of Natural History, and the British Museum. The piece retained by Vanderbilt is not listed and is known as the “lost piece.”

In 1991, The Henderson County Gem & Mineral Society contacted the Smithsonian and received on loan the Hendersonville Meteorite to display at the club’s 11th Annual Gem & Mineral Spectacular. When the Mineral & Lapidary Museum of Henderson County, Inc., opened its doors on November 6, 1997, the Smithsonian was approached about letting the Museum have the piece on loan. Instead the Smithsonian lent the Museum a polished slab of the meteorite for a 10-month period. As the Museum approached its 10th anniversary, the Smithsonian agreed to again lend the polished slab, but this time for a three-year period. The loan of the Vanderbilt piece, never listed in the “Catalogue,” is open-ended.

When did it fall? According to Captain Toms something fell in 1876. But, in a private letter in 1991, Dr. Roy S. Clarke, Jr., Curator, Division of Meteorites at the Smithsonian, stated that he felt the weathering indicated it had been on the ground much longer. So the answer is, “We just do not know.”

All meteorites, except those found in Antarctica, are named after the geographical location near the place of finding. Those from Antarctica have a numbering system. More meteorites have been found there in the last 100 years than all other places in the world put together in all recorded time! Directory of Maps at StepMap